At 12 years old, Keontaye Crawford had already spent half of his life in the foster care system. He watched as other children around him, including his biological sisters, were adopted, and he started to lose hope. After getting in a fight at the group home where he lived, he tried to run away and was arrested shortly after.

A woman named Billie witnessed his arrest and recognized him as the neighbor boy who was in foster care. She decided to do whatever it took to mentor Keontaye. Billie took him out to meals, activities, and church on Sundays. She encouraged Keontaye to smile often because at 6’1″ and 285 lbs., Keontaye is quite intimidating when he is not smiling.

At age 15, Keontaye was photographed for Indiana’s adoption magazine. Dawn and Bill Dunkman received this adoption magazine in the mail and as they flipped through it, “We were so drawn to his smile,” Dawn says. But at the time, the couple wanted to adopt a young girl.

Then one day, Bill saw Keontaye at church with Billie. He later told his wife, “That boy from the book goes to our church!” Shortly after, Dawn remembers praying, “Lord, show me who You want us to adopt,” and that smiling image of Keontaye popped into her mind. “It was the same feeling as the day my biological children were born-I was meeting my son for the first time.”

Dawn and Bill Dunkman adopted Keontaye just weeks before his 17th birthday. When Keontaye ponders where he would be if he had aged out of the foster care system, he says, “It wouldn’t be good. I wasn’t prepared for the real world.”

Transitioning from living in a residential facility to living with a family was extremely difficult for Keontaye. He says it was years before he trusted the Dunkmans. Every time he would start to get close to them, he would test them to see if they would give up on him.

“The type of parenting you have to do with an adopted child is completely different, advises Dawn, “You have to educate yourself to develop empathy. Put yourself in their shoes over and over again. There is a lot of hurt and a lot of fear, and because of that, there are a lot of behaviors. What made him start to trust us is that we stuck with him when he messed up.” 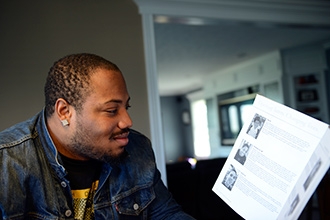 Keontaye has his own advice for families who are considering adoption: “Be there for them 100%. And don’t overlook kids because they’re a bit older. They need families just like the younger ones.”

Keontaye also has advice for all the kids who are still in the book waiting for a family: “Be patient. Keep praying.” Billie’s advice to Keontaye also rings true: “Keep smiling.”